Around the famous streets of Monte Carlo, passion, excitement, and dramatic rivalries have all been instrumental in building a racing legacy here many other circuits would envy. The question is, though, with Lewis Hamilton completing a fifth Mercedes win in the last seven races, a circuit notoriously difficult to overtake on and safety top of the agenda, is Monaco still the sparkling jewel in the F1 crown? 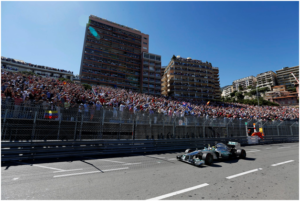 Anyone attending the Monaco Grand Prix in this historical sporting venue will instantly get an answer to this question from the wall of sound emanating thousands of F1 fans.

Reverberating from the slopes below the Royal Palace, all the way up and around Casino Square and down to the swimming pool, their enthusiasm says this is still the place to be. In a location reflecting sound on three sides, the atmosphere created by the fans is, quite literally, a visceral one.

Then there is the roar of some of the highest-performance engines in the world at close quarters. For those in the F1 Paddock Club Monaco glamour and technical wizardry, standout features at this race, are within even closer touching distance. But where is the F1 paddock Club in Monaco? Not surprisingly, right in the middle of the action. Even out to sea, super-yachts continue to clamor every year for a glimpse of the (albeit more distant) action. If the fans are anything to go by then, the evidence so far is positive. What About the Racing Itself, Though?

There is no shortage of footage of great races here past and present. But the issue of the quality of the race is a question at least as important as the atmosphere, glamour and engineering excellence. BBC Motorsport among others is clear. In their view, pin-point racing around this circuit continues to electrify as it always has, comparing this year to the Senna vs Mansell drama of 1992 and 2018’s Vettel vs Ricciardo battle.

So it may have been over 25 years since the late great Ayrton Senna stormed to an unequaled sixth win in the principality, but today, as then, the Monaco Grand Prix evidently continues to enthrall new and seasoned racing fans. The jewel, it seems, is sparkling as bright as ever.